An Còinneachan  (Fairy Lullaby)  This Gaelic lullaby first appeared in 'Duanaire', edited by D. C. Macpherson (1864).   The song is based on an old Celtic belief that an unattended baby would be stolen away by fairies.  The words tell of a woman who puts her baby down to pick some berries just out of reach.   Upon circling the bush to look for the basket with her babe, she is unable to find it.   Disconsolate, she sings this song.  Còinneachan is a term of endearment applied to child.

Màiri Bhàn Òg  (Mary, Young and Fair)  A slow air from the Scottish Gaelic tradition with an early appearance in print in Capt. Simon Fraser’s 1745 collection, 'The Airs and Melodies Peculiar to the Highlands of Scotland and the Isles'.  Believed to have been written by Duncan Bàn MacIntyre (1724-1812) of Glen Orchy, Argyll, one of the most renowned of Scottish Gaelic poets of the 18th Century.  A love song composed to his wife, young fair-haired Màiri.  He uses images of a forest and one beautiful stately tree, growing only for him. 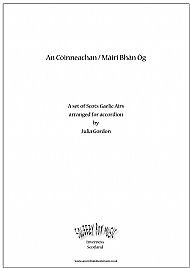 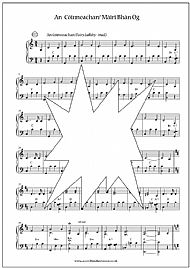 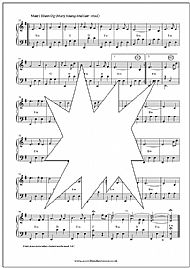