a set of four Scottish and Scots Gaelic airs arranged for accordion
RH and LH notation with suggested couplers
duration:  4:14
suitable for self-improvers and teaching accordion.

Loch Rannoch  Originally a slow air reflecting the action of rowing across the loch, this bagpipe tune was composed by Edinburgh-born John Wilson (1906-1979).  Wilson was a renowned piper and teacher who left Scotland in 1949 to settle in Ontario, Canada.   The tune appears in 'John Wilson’s Collection Of Highland Bagpipe Music, Book 1', first published in 1937.

Morag Of Dunvegan (Mòrag a Dùnbheagain)  This is a popular love song in which the bard tells of his love for Morag from Dunvegan, that he will always be true to her.  The melody is attributed to Neil Matheson with Gaelic words by Catriona Dhughlas (1893-1965) of Skye.  It is also known as A Dunvegan Love Lilt.

Farewell To Skye (Soraidh Leis an Àit')  A traditional Gaelic tune about leaving Skye, also known as Farewell To The Place.

The Skye Boat Song  Originally a Gaelic rowing song, sometimes sung as a lullaby, called Cuachag nan Craobh (The Cuckoo in the Grove).  The lyrics were written by Sir Harry Boulton to an air collected in the 1870s by Anne Campbelle MacLeod (1855–1921) and first published in 'Songs of the North' in 1884.   The song recalls the escape of Prince Charles Edward Stuart (Bonnie Prince Charlie) after his defeat at the Battle of Culloden in 1746, from Uist to the Isle of Skye, aided by Flora MacDonald. 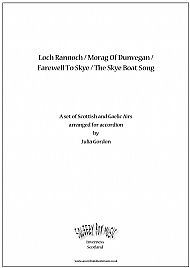 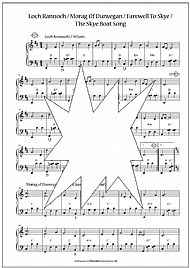 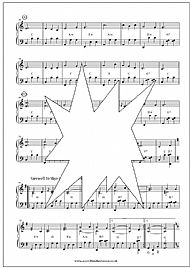 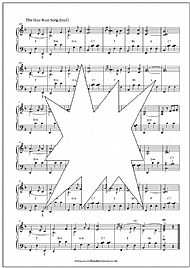