a set of two Scottish airs arranged for accordion
RH and LH notation with suggested couplers
duration: 3:40
suitable for improvers and teaching accordion

Farewell To Lochaber (Cha Till Mor Mo Bhean) - Also known as ‘Lochaber No More’, this ballad was first published in ‘Tea Table Miscellany’ (1724). The words are by the poet Allan Ramsay (1686-1757) who had strong Jacobite leanings although he never actually participated in the uprisings.  The tune itself is usually attributed to the Irish Harper, Thomas Connellan who died in 1698. Connellan apparently spent time in Scotland, and adapted the tune ‘Limerick's Lamentation’ to ‘Farewell to Lochaber’.  ‘Limerick’s Lamentation’, however, retains a claim on being originally a Scottish tune that was only ‘refashioned’ by another Irish harper, Myles O'Reilly.  It is said that, in the old days, the playing of this nostalgic Gaelic air to the Highland regiments on active service abroad had such a profound adverse effect on the morale of the men, that eventually it had to be banned.  Lochaber, in the north-west of Scotland, is a wild and rugged place of mountain and moorland, running from the Great Glen to Knoydart on the coast.

Sheiling Maids (Maighdeanan na h-Airidh) - also known as ‘Mo Mary’ and ‘Maighdeanan na  Hibiridh.  A slow air collected by Marjory Kennedy-Fraser on the isle of Barra, and both English and Gaelic versions were published in Songs of the Hebrides, vol. 1 (1908).  Some sources name the tune’s composer as John MacHilvray, alias ‘Alasdair Ruadh’, the piper to Alexander Macdonald of Glenaladale, the piper who was responsible for the building of the Glenfinnan Monument in 1874 and who later emigrated with his family to Nova Scotia. 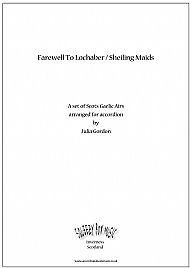 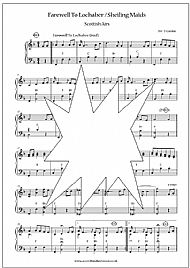 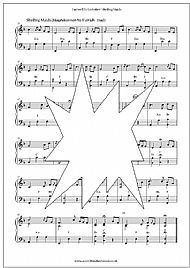