a set of three Scottish airs arranged for accordion
RH and LH notation with suggested couplers
duration:  3:43
suitable for self-improvers and teaching accordion

Kirkconnel Lea  Also known as Helen of Kirkconnel, Fair Helen, and [I Wish I Were] Where Helen Lies.  This well known Scottish ballad is about the tragic death in the 16th Century of helen Irving who, intervening in a quarrel between two rival admirers, is inadvertantly fatally wounded.  The air itself is believed to be much older.

The Fower Maries  This ballad, also known as The Four Marys, Mary Hamilton and The Queen's Marys, dates from the 18th Century and is believed to be a hybrid of two stories - one taking place at the court of Mary Queen of Scots and the other at the court of Peter The Great, Tsar of Russia, both concerning a handmaiden who was executed for the murder of her illegitimate child.

Sound The Pibroch  This is a traditional Jacobite tune to which words were added by Mrs. Norman MacLeod in the 19th Century. 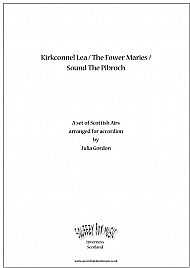 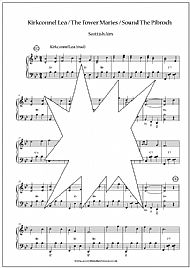 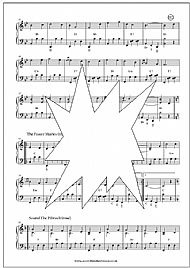 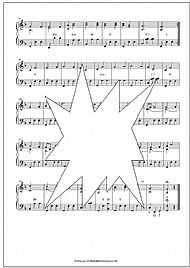