a set of three Scottish airs arranged for accordion
RH and LH notation with suggested couplers
duration:  3:34
suitable for self-improvers and teaching accordion

Mo Ghile Mear  (My Gallant Darling)  This is an old Irish song, written in that language by 18th-Century poet Seán Clárach Mac Domhnaill in tribute to Bonnie Prince Charlie.  It is a lament or caoineadh that was written after his defeat at the Battle of Culloden in 1746.

Ae Fond Kiss  This song is Robert Burns' most recorded love song.  After the publication of his collected poems in the Kilmarnock volume in 1786, Burns regularly travelled and stayed at Edinburgh.   While there he established a platonic relationship with Mrs Agnes Maclehose.  Burns wrote the song after their final meeting in 1791, before she left for Jamaica to be with her estranged husband.  Burns' verses were set to the tune of Rory Dall’s Port.  The musical score was published in the collection of Scottish folks songs known as 'The Scots Musical Museum' (1787-1803).

My Nannie’s Awa’  This Burns' song, composed in 1794, is a lament sung by a young man for his absent lover.  Although the ballad highlights the many joys that nature can offer, it seems that the lovesick young man can no longer appreciate these joys, as he can only think about his departed lover.  It is set to an old tune, There’ll Never Be Peace. 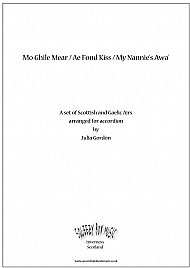 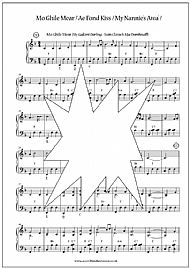 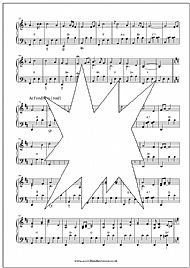 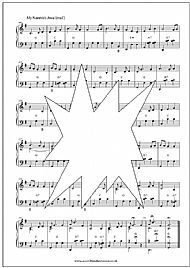